The Letter Vav (ו) In the Hebrew Alphabet

The letter Vav is the sixth letter in the Hebrew alphabet. Through the ancient Phoenician language, the letter Vav actually became the modern letter “F” used in the English and Latin alphabets. Unlike many other letters in the Hebrew alphabet, the original meaning of the letter Vav actually seems quite obvious and straightforward. The word “vav” means a “hook,” “spear,” or “tent peg” in Hebrew, therefore the name and shape of the letter are directly connected to this meaning. The Hebrew letter Vav itself has a very interesting pronunciation history and a variety of different uses and meanings.

Most scholars agree that the ancient pronunciation of the letter was more like a “W” and less like the “V” that it currently has in the Modern Hebrew language. This assertion has a lot of support if we simply look around at modern use in other Semitic languages. In Arabic, for example, only the “W” sound exists, and the “V” sound does not exist. Among certain Jewish pronunciations, the original still holds true, as Yemenite Jews to this day pronounce the Vav as a “W” in specific cases. When Hebrew is written with pronunciation markings (nikud), a Vav without any markings is pronounced like the “V” in “very,” a Vav with a dot in the middle is pronounced “oo,” as in “fool,” and a Vav with a dot on top is pronounced “o,” as in “go.”

Similar to the Hebrew letter Hei, the Vav is one of a handful of Hebrew letters that has its own meaning. When attached to the beginning of a word, the Vav has the meaning of “and.” For example, the word “zeh” (זה) means “this,” and if we make the word “v’zeh” (וזה) by adding a Vav to the word’s beginning, we get the word “and this.” As we see, although one of the simplest letters to write, Vav has many different meanings and usages.

Read about the letter Zine ז 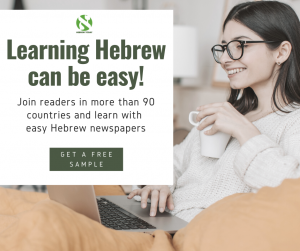